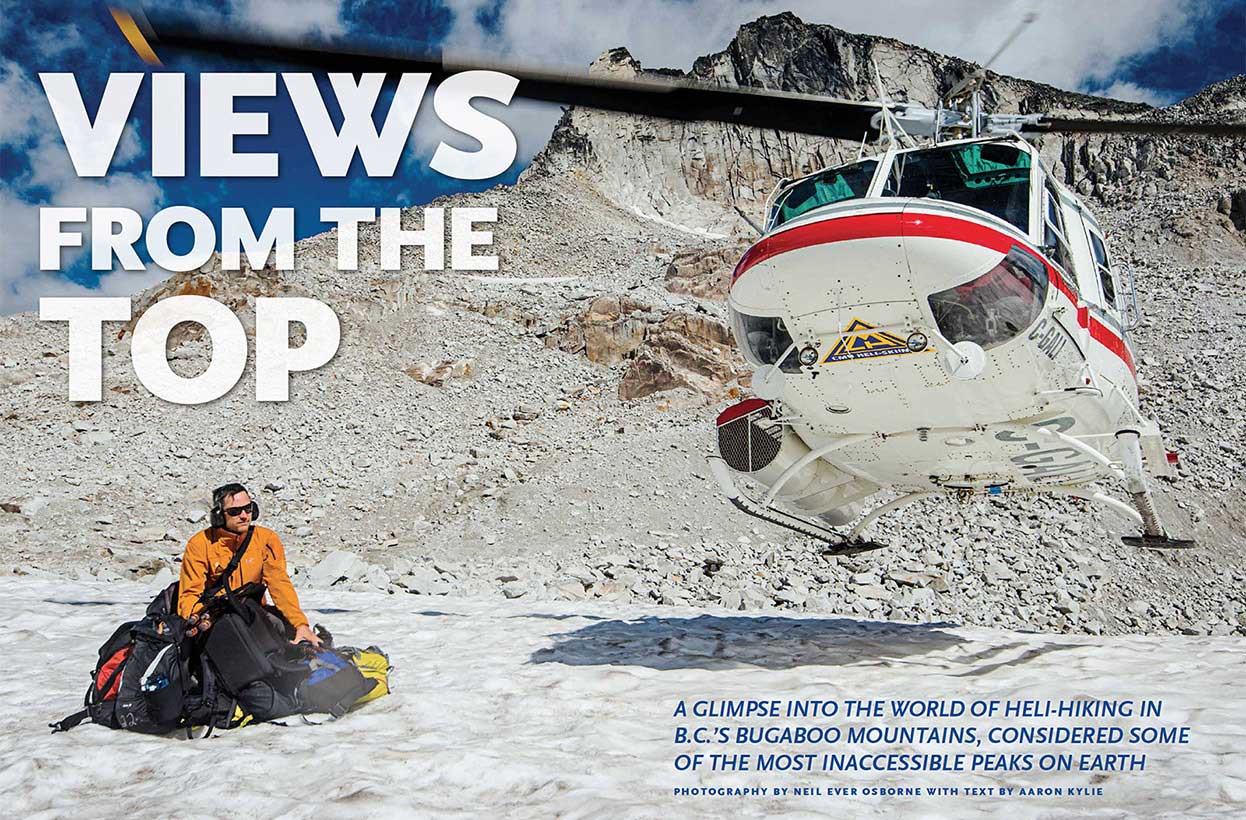 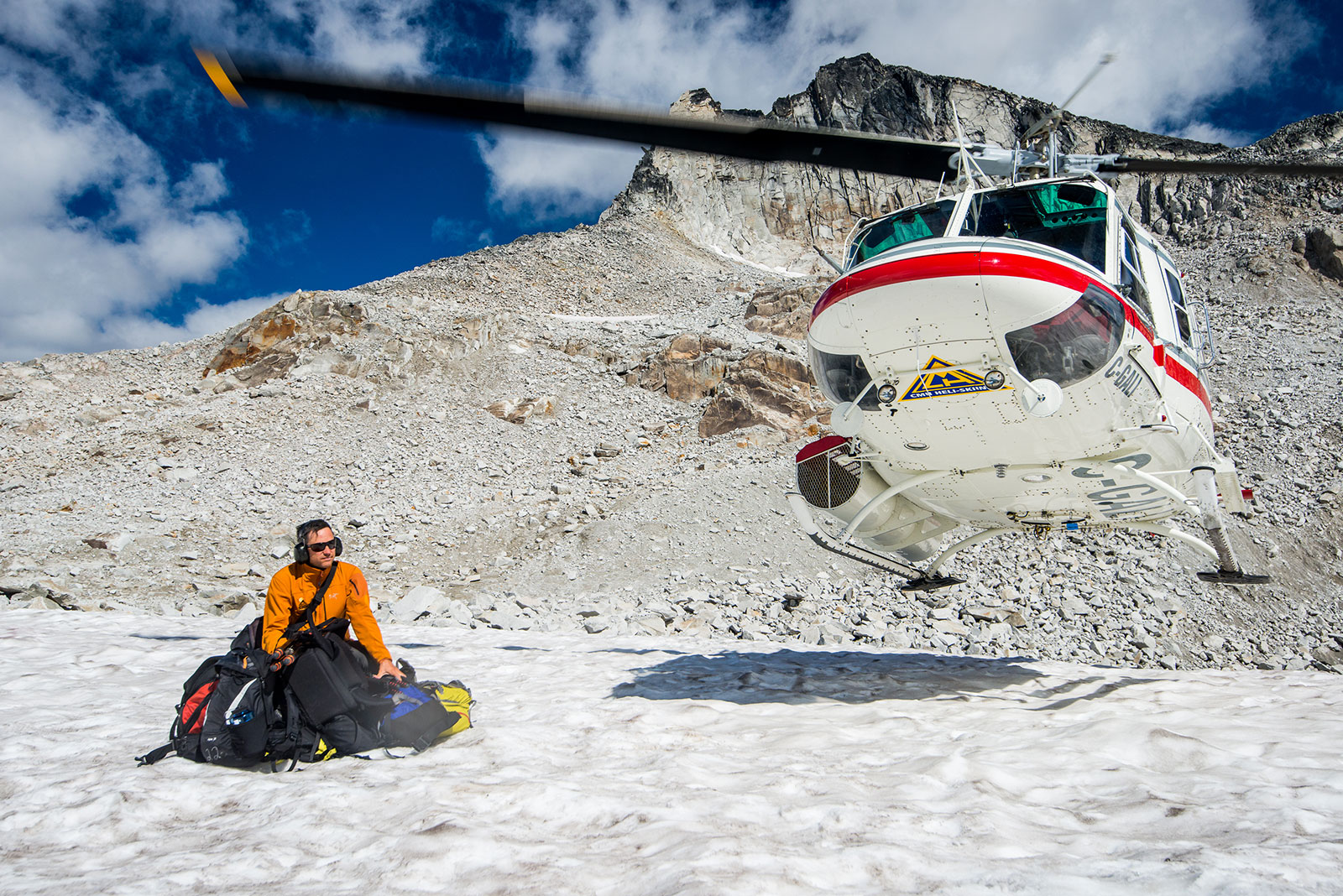 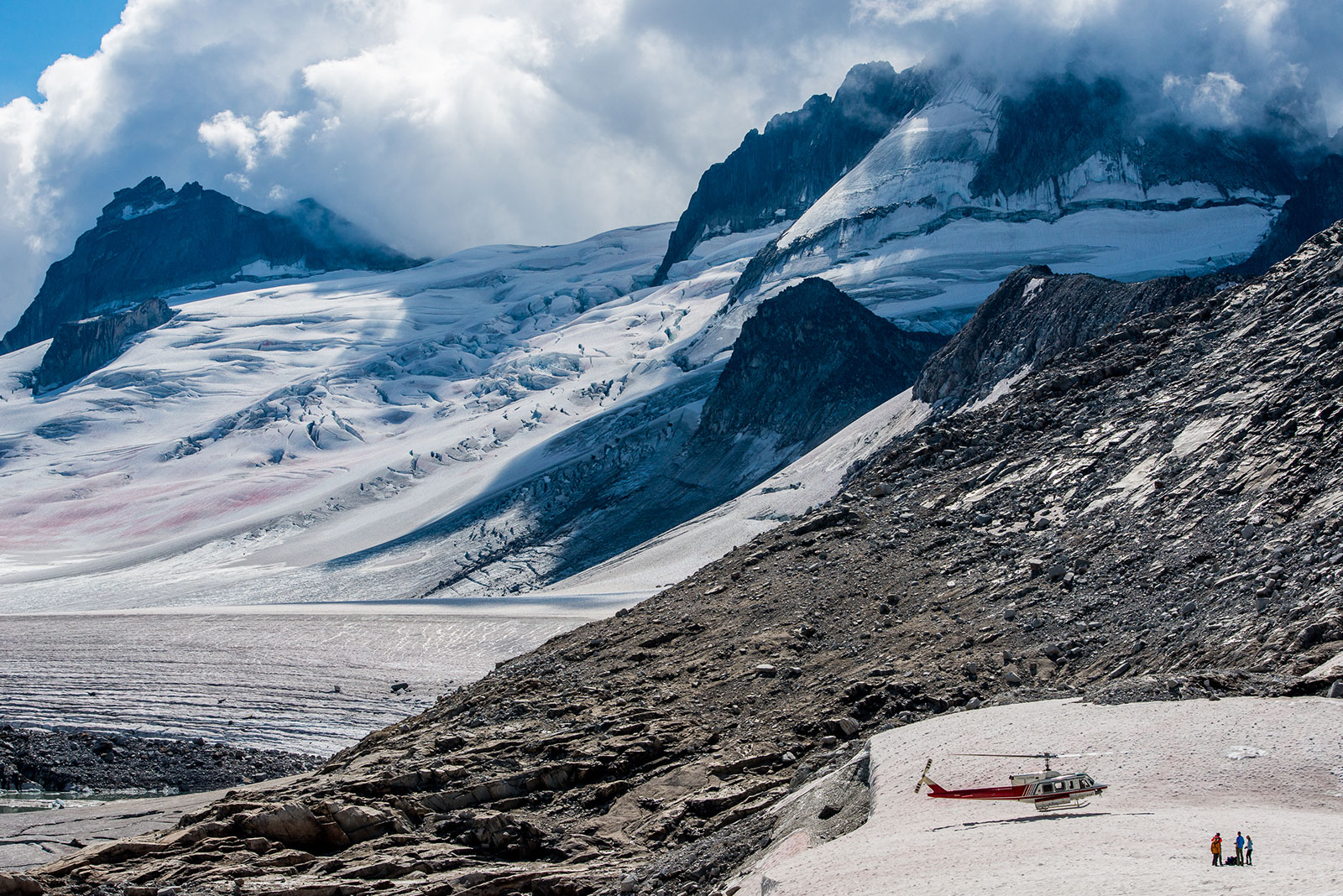 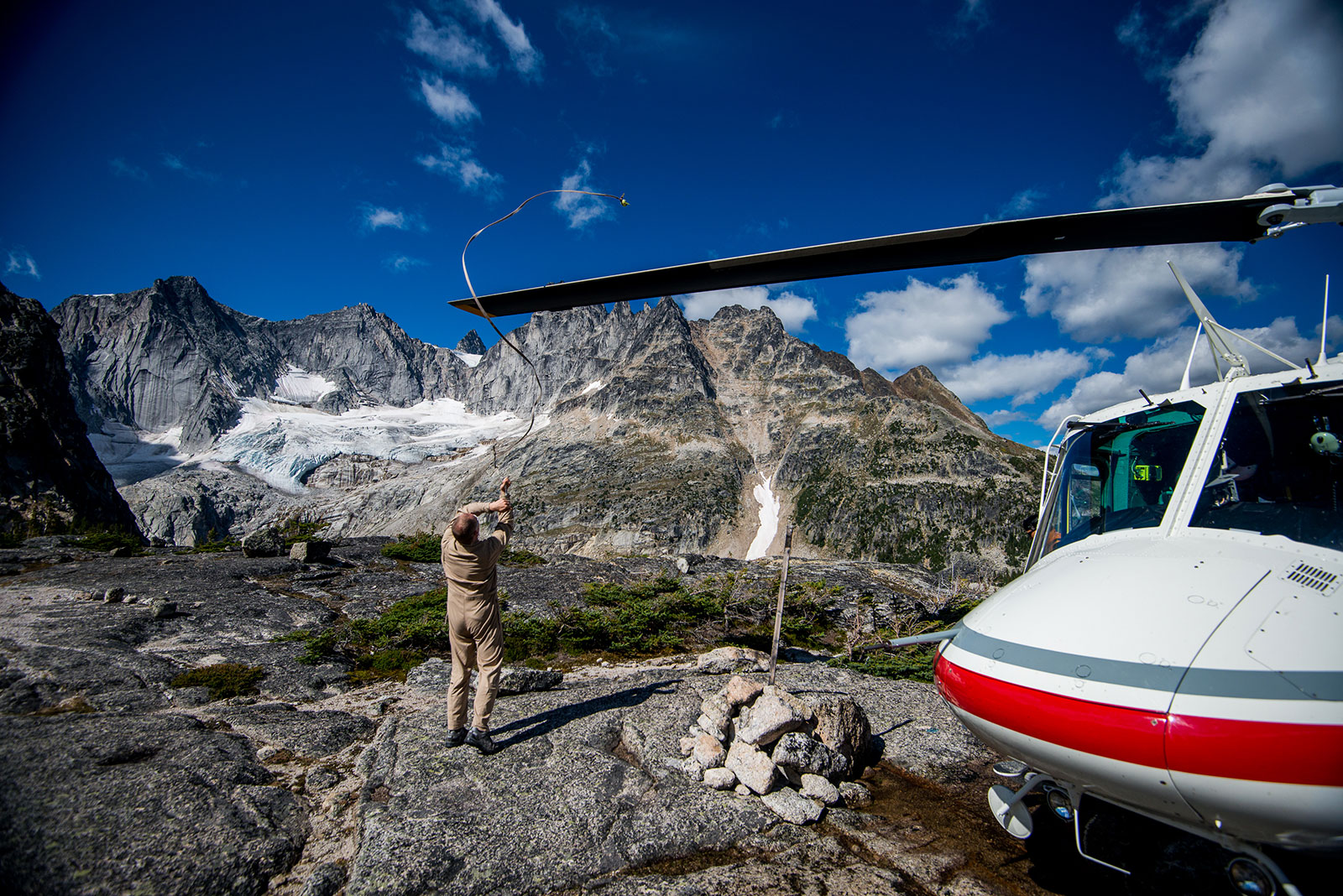 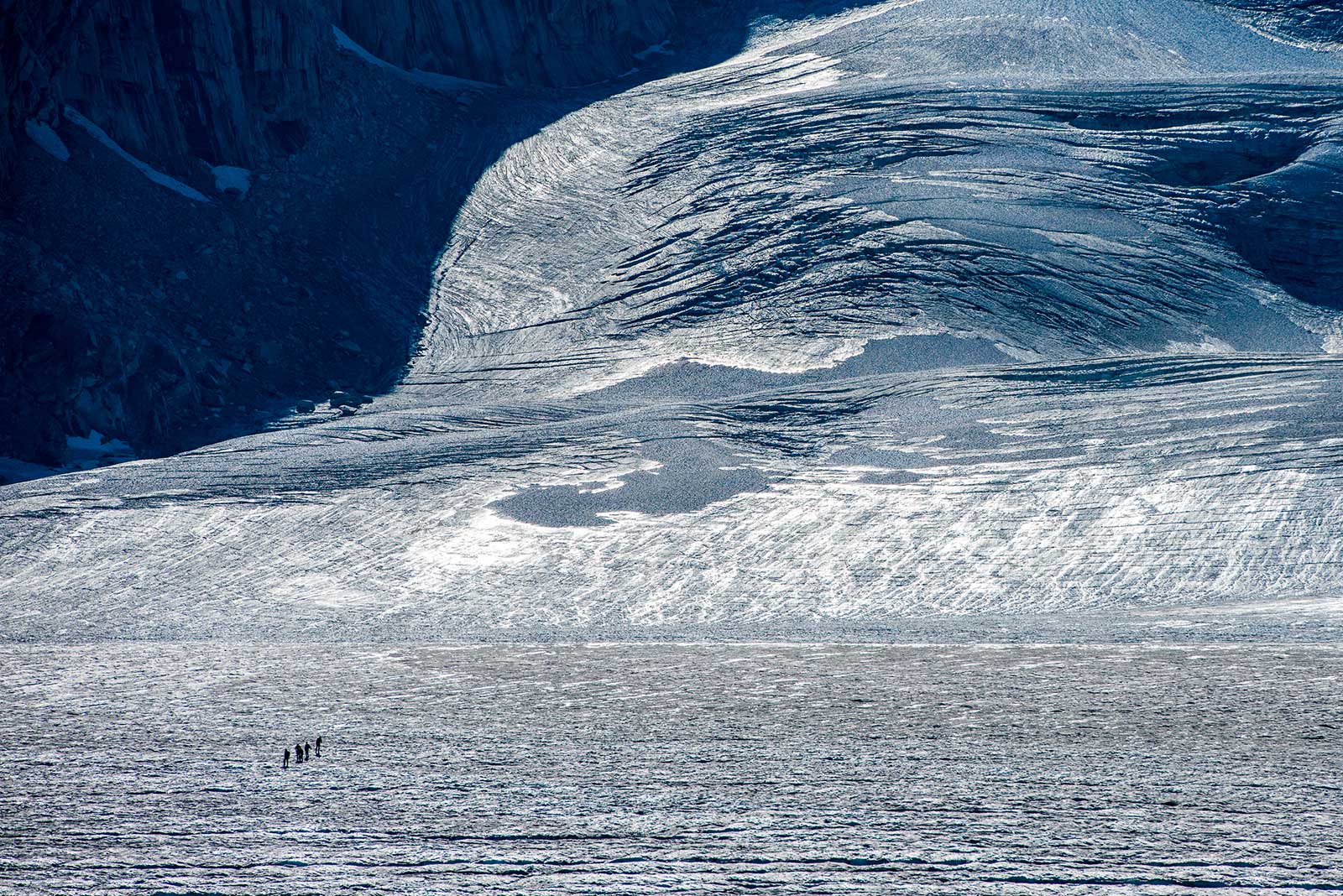 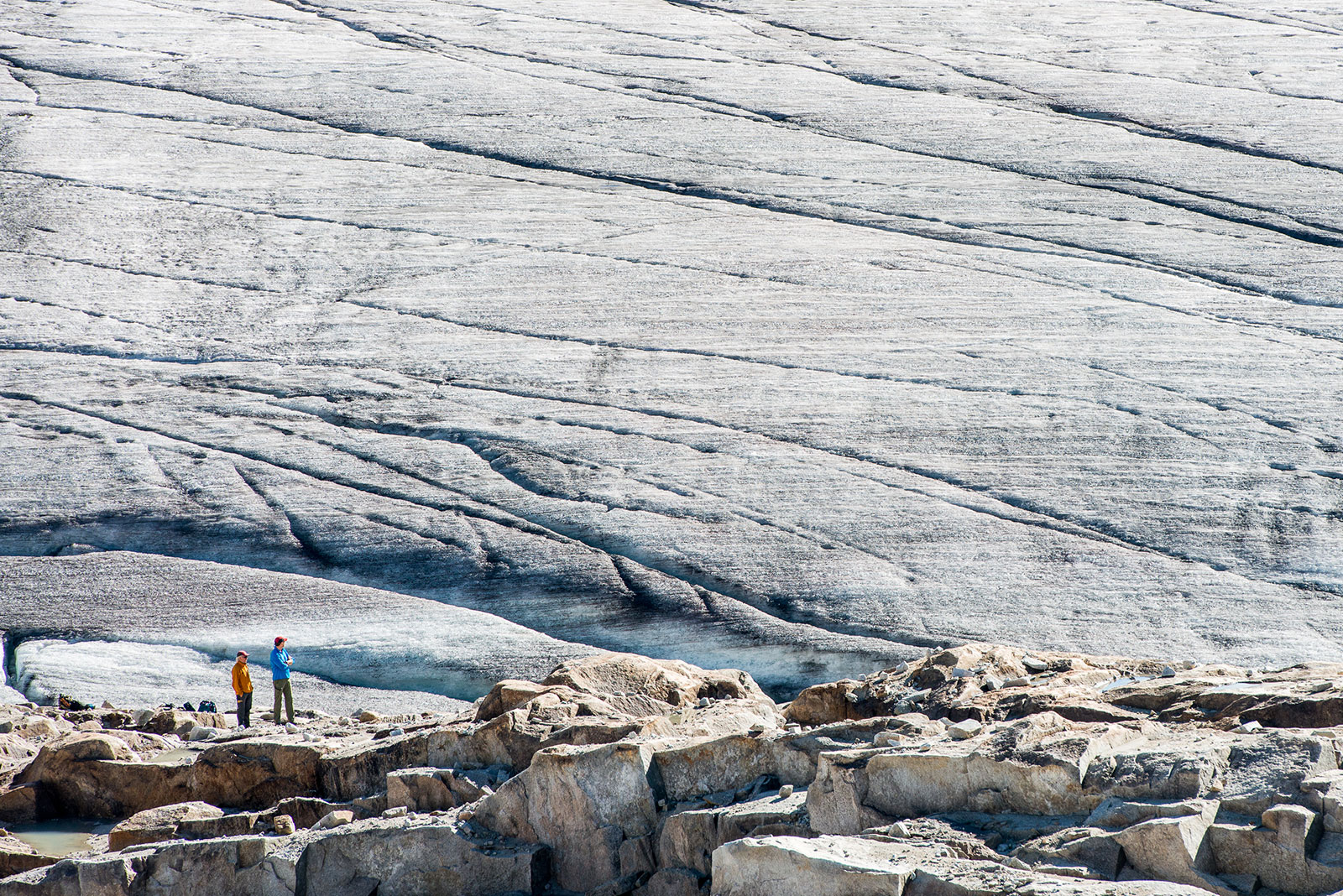 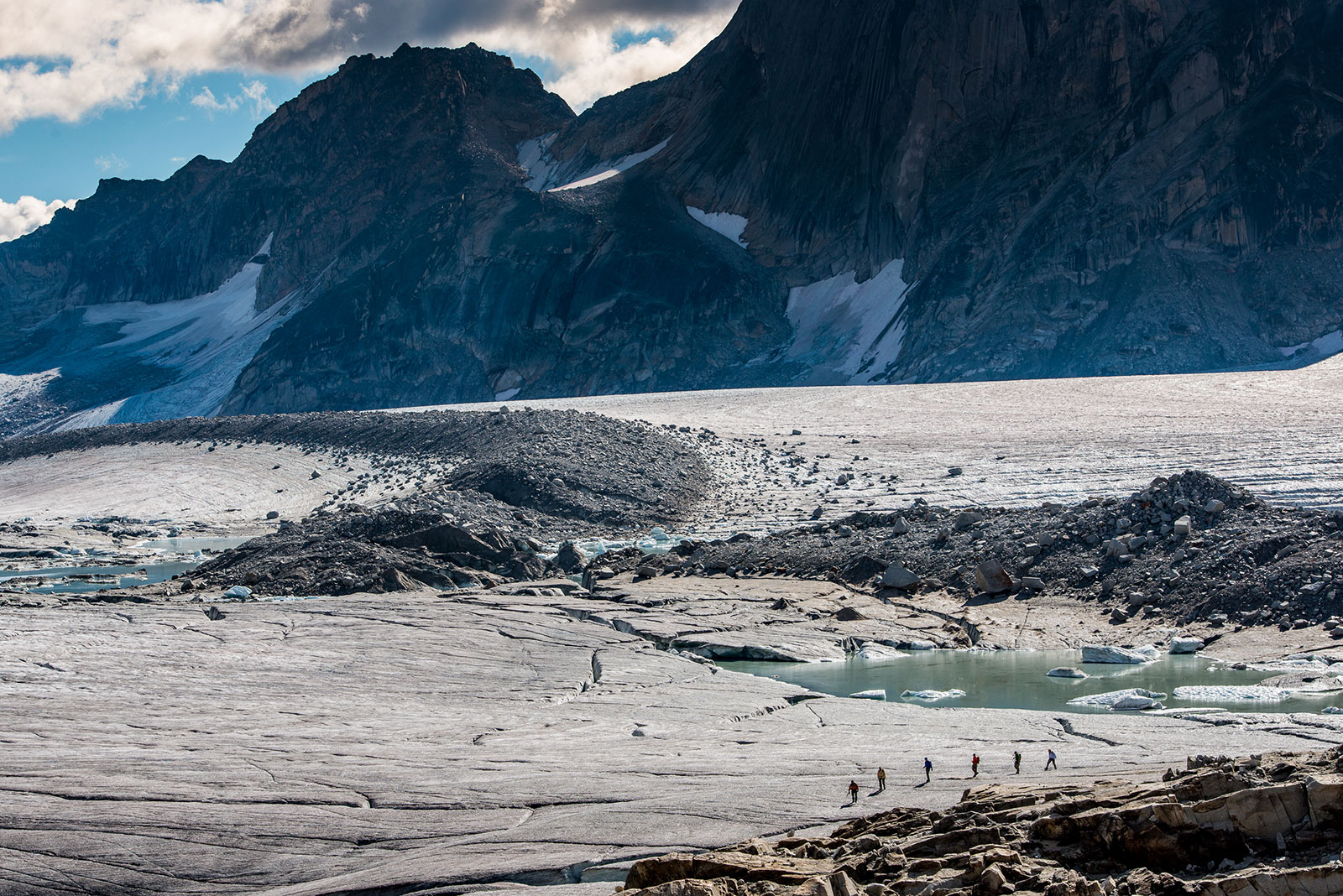 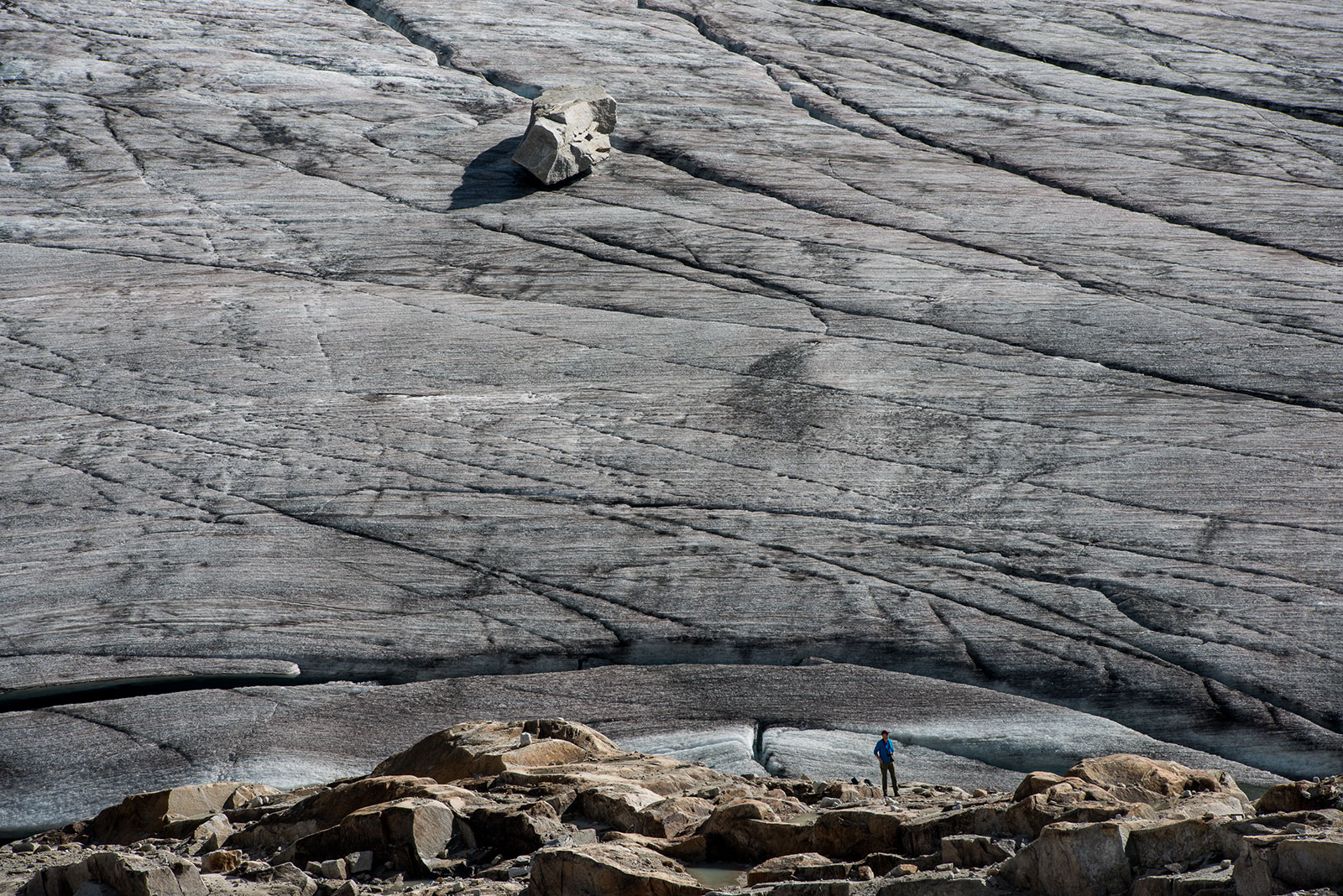 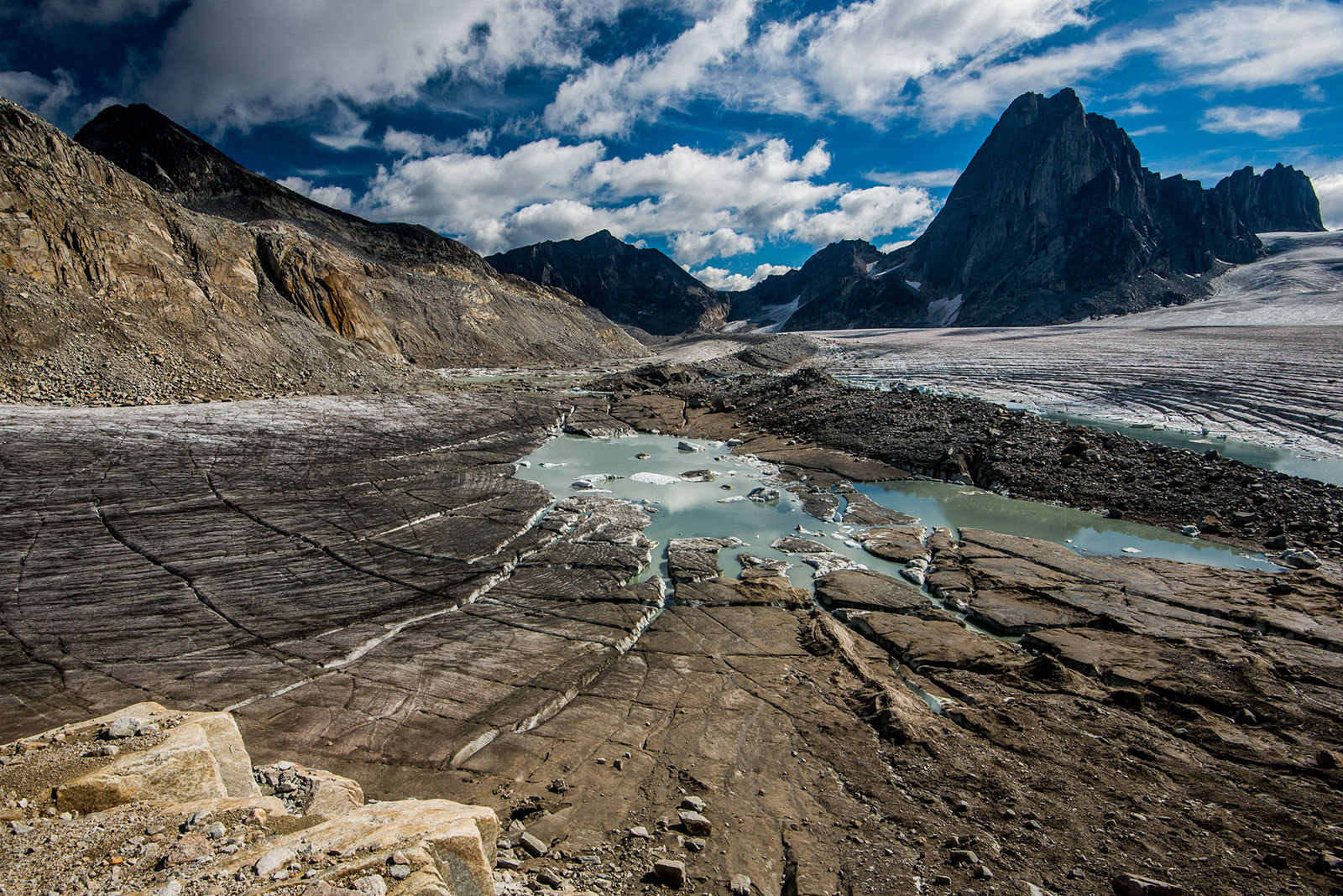 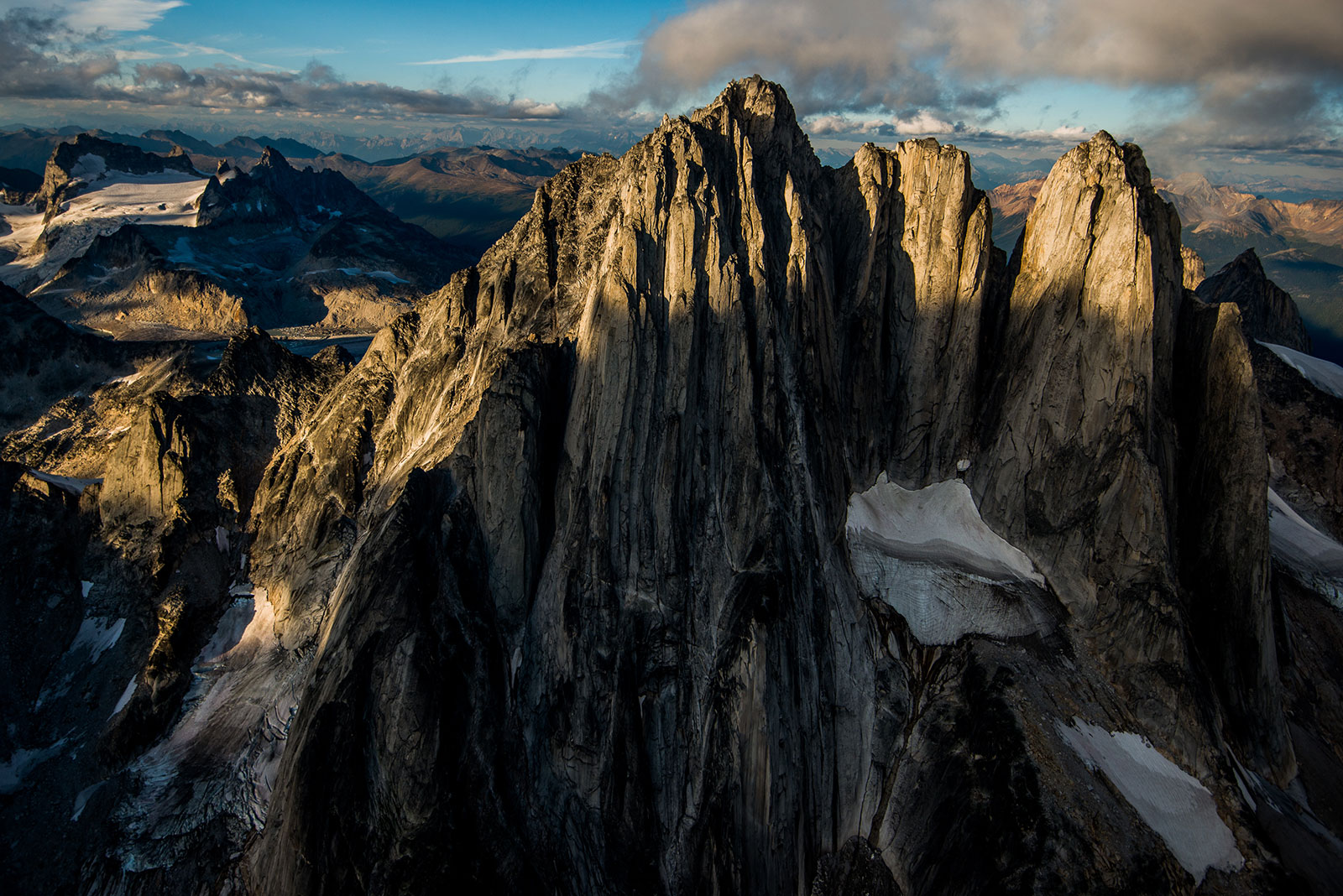 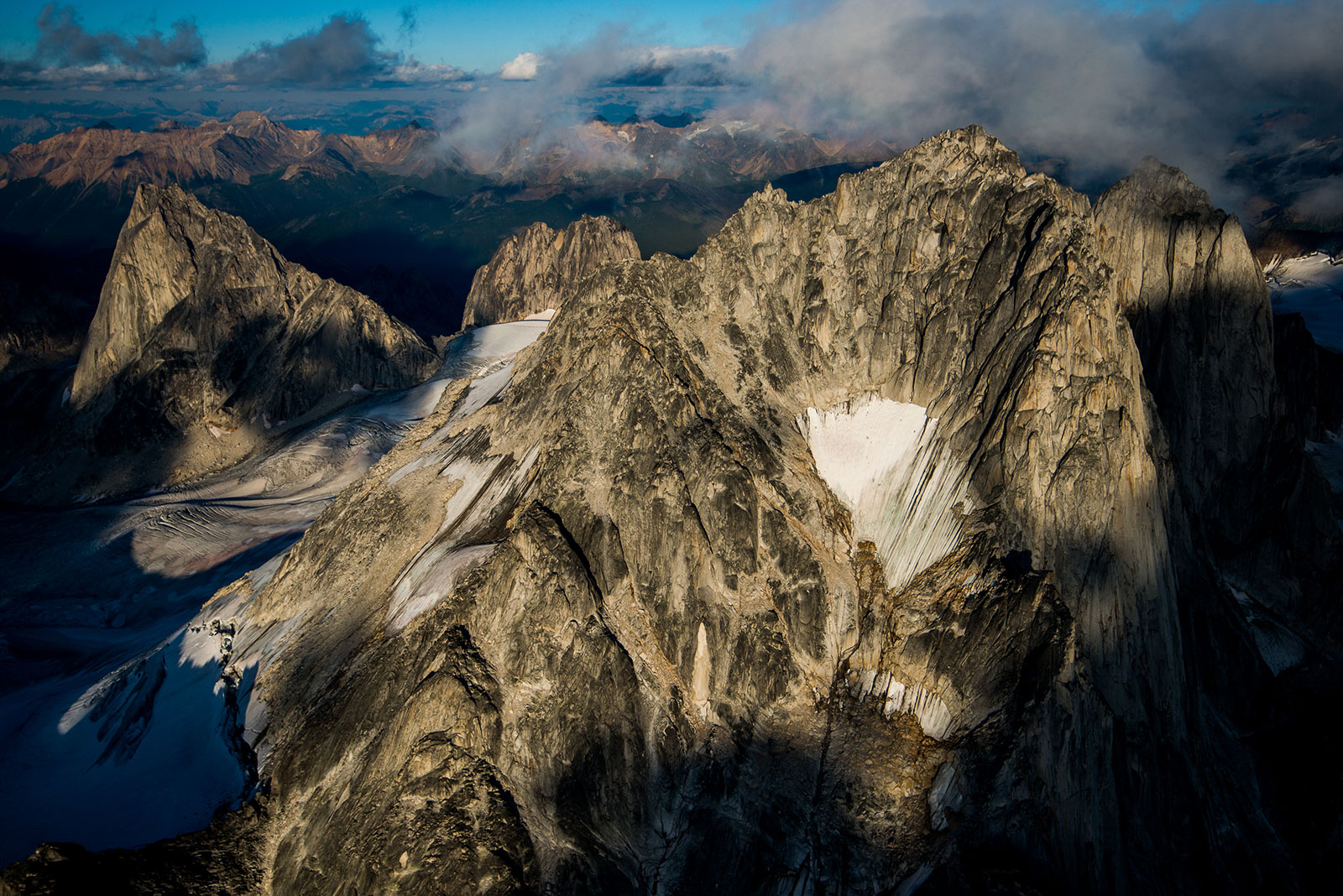 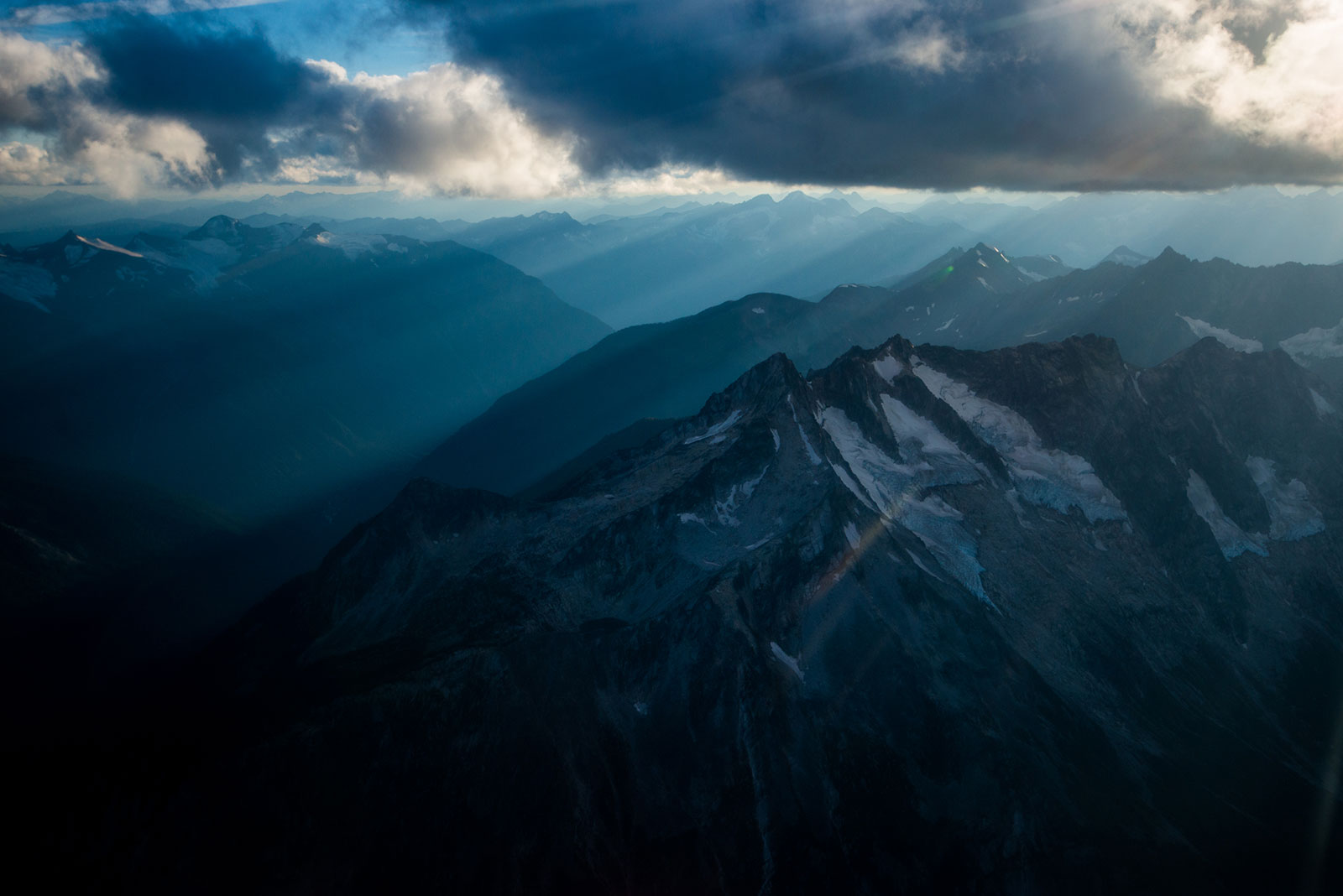 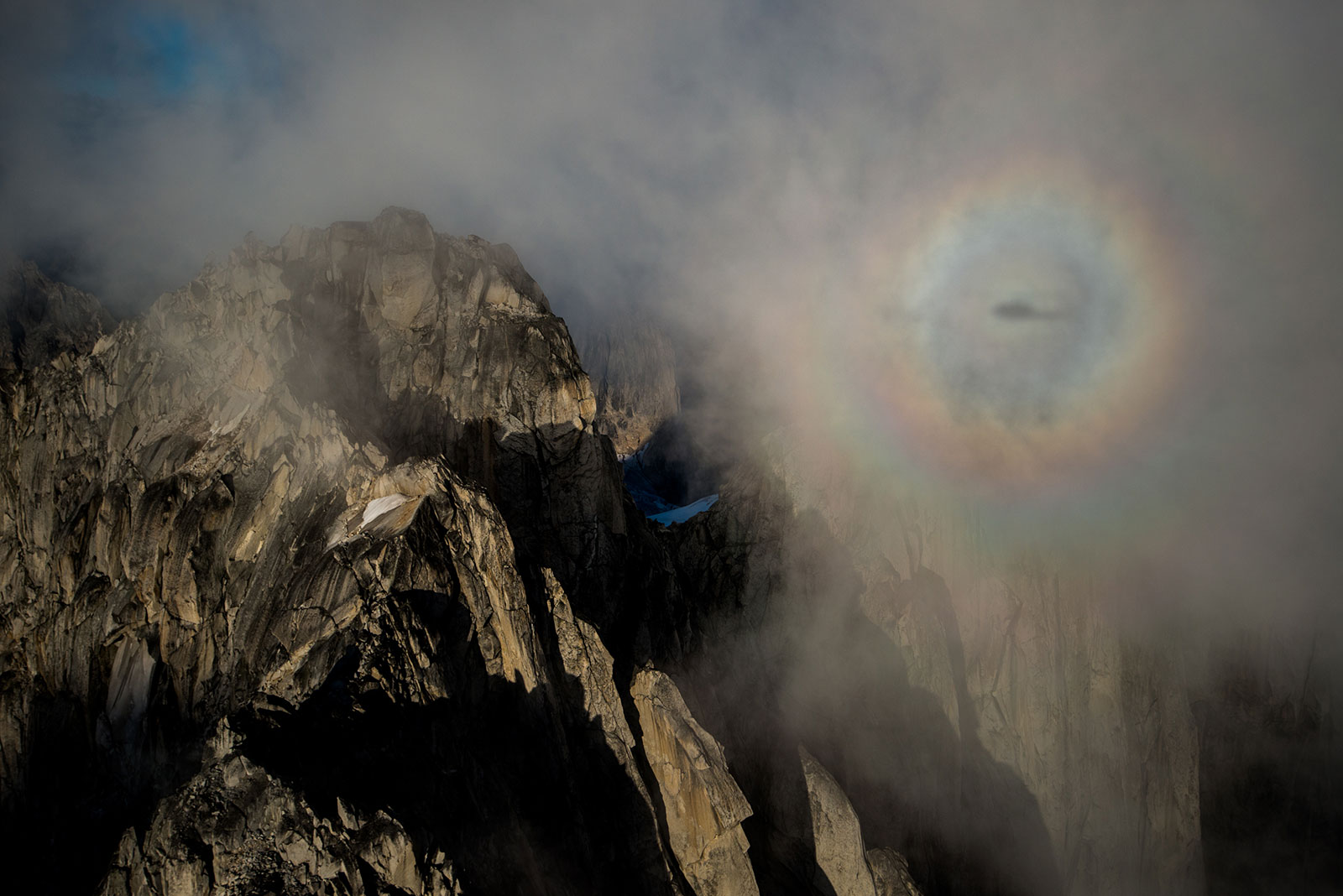 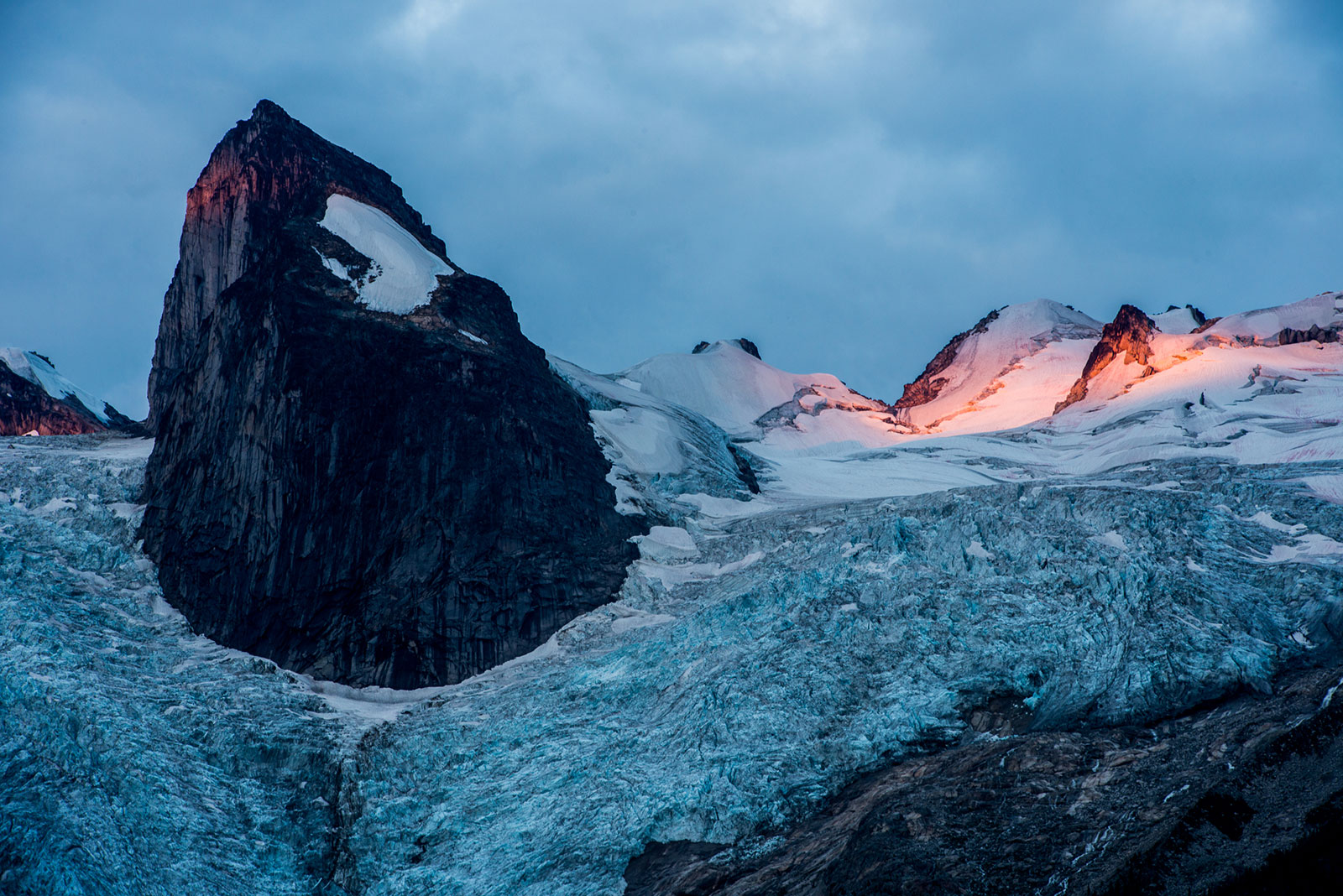 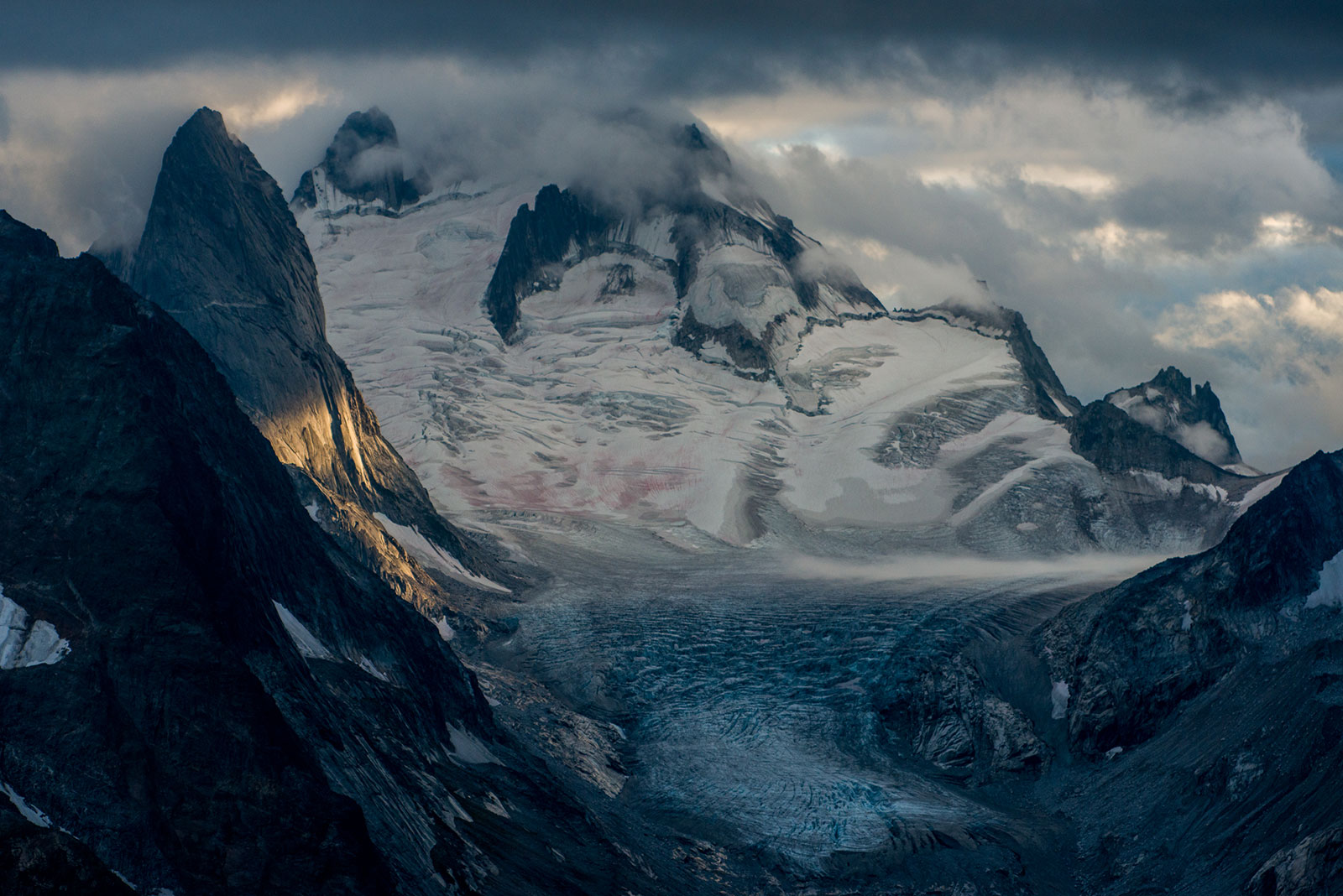 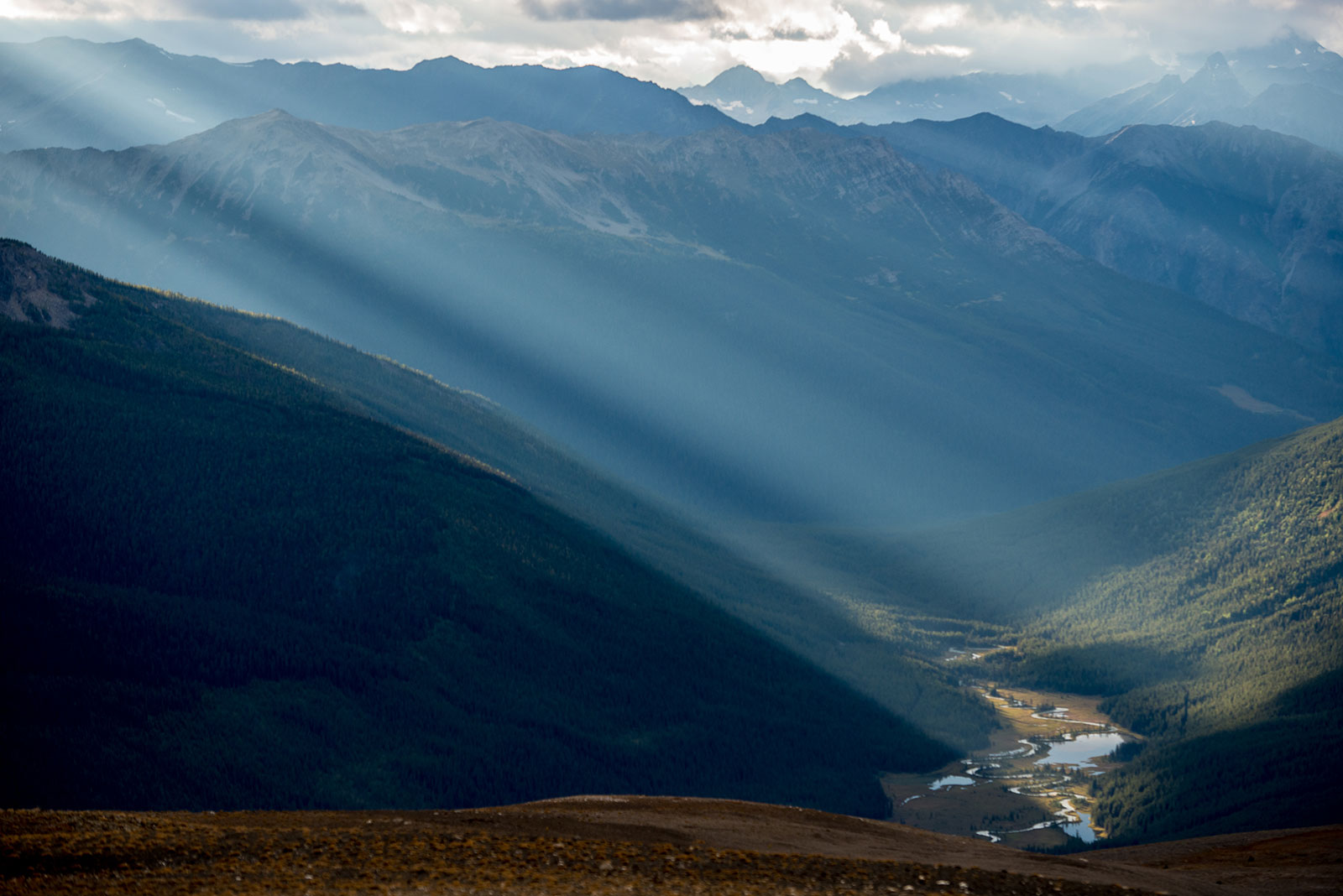 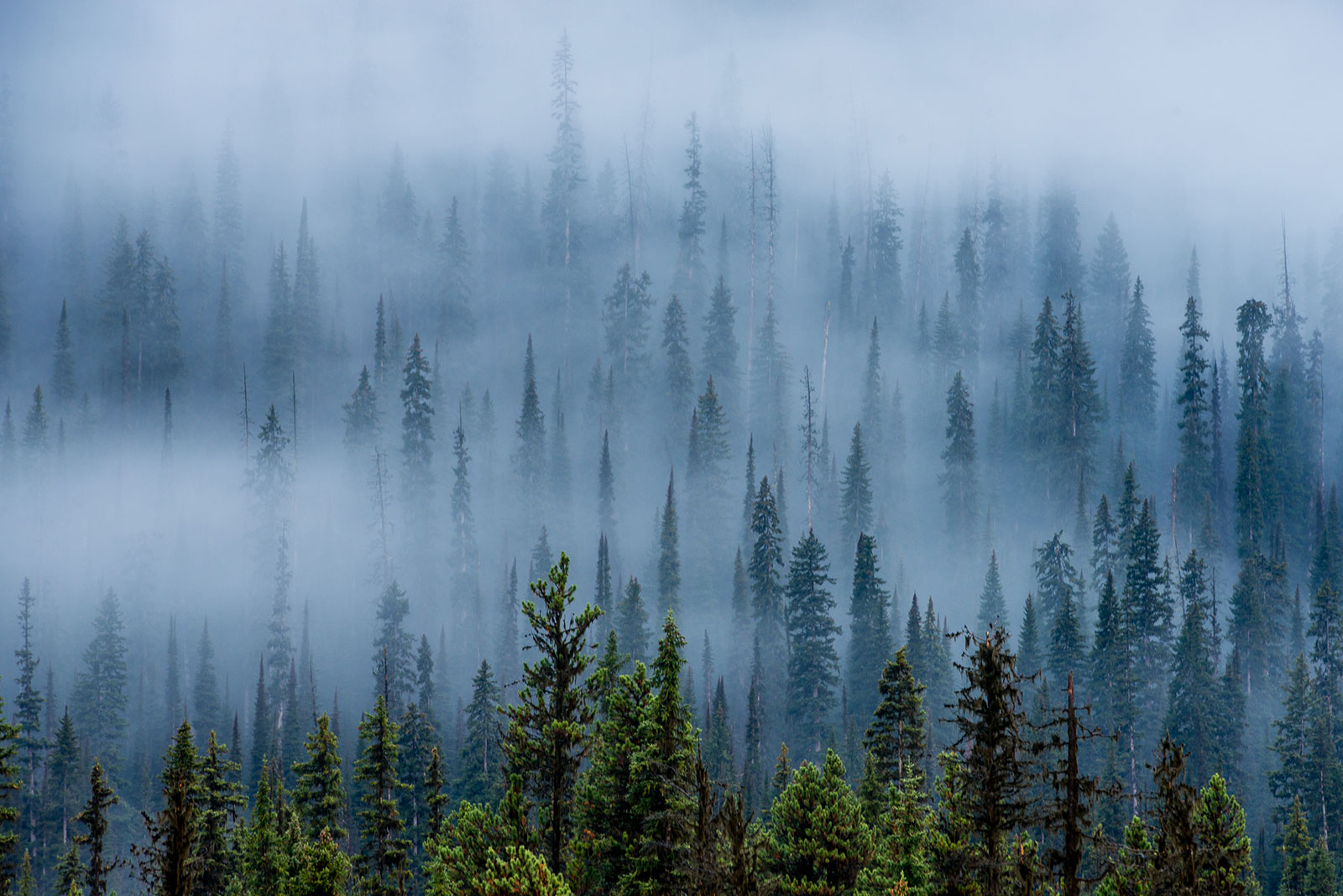 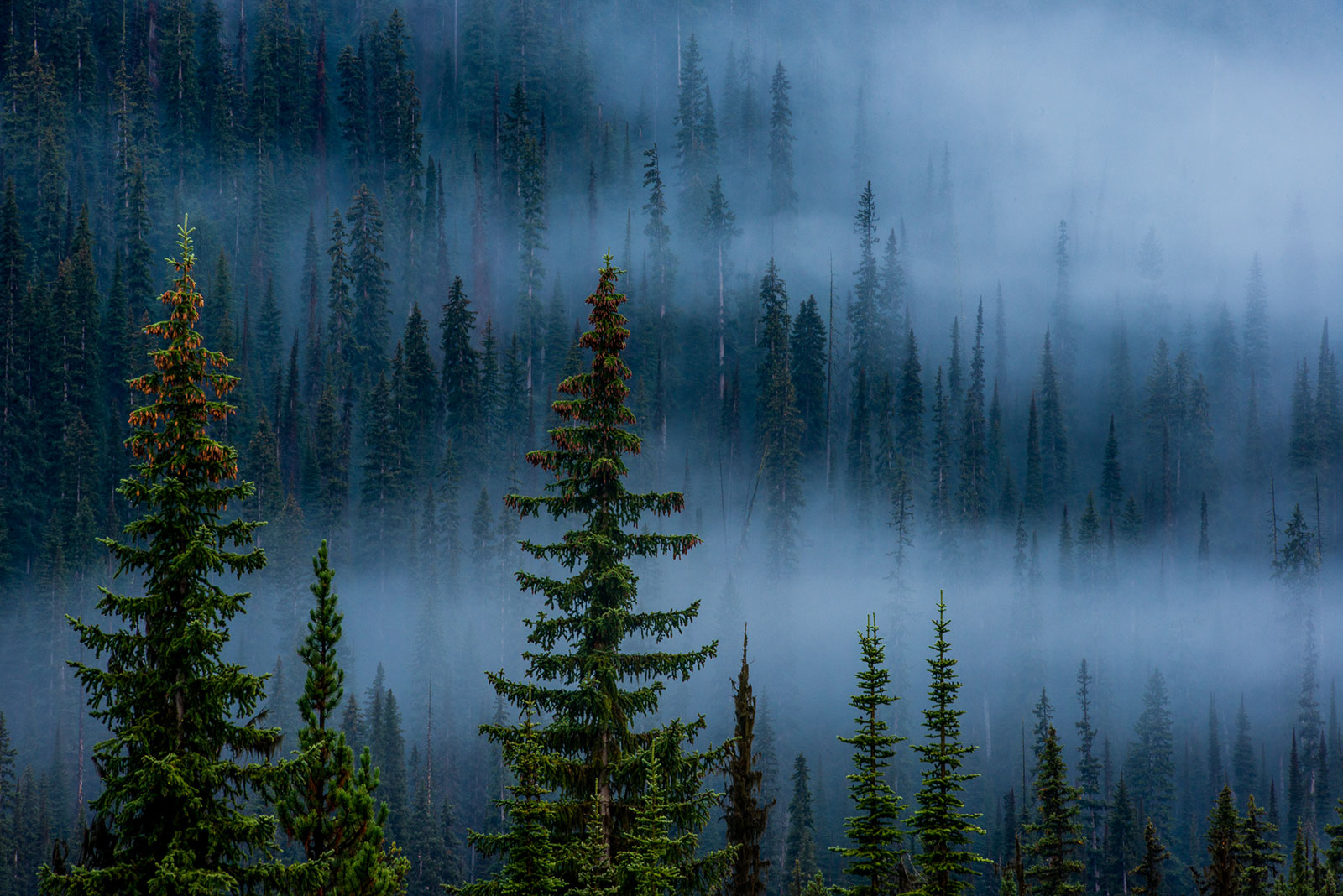 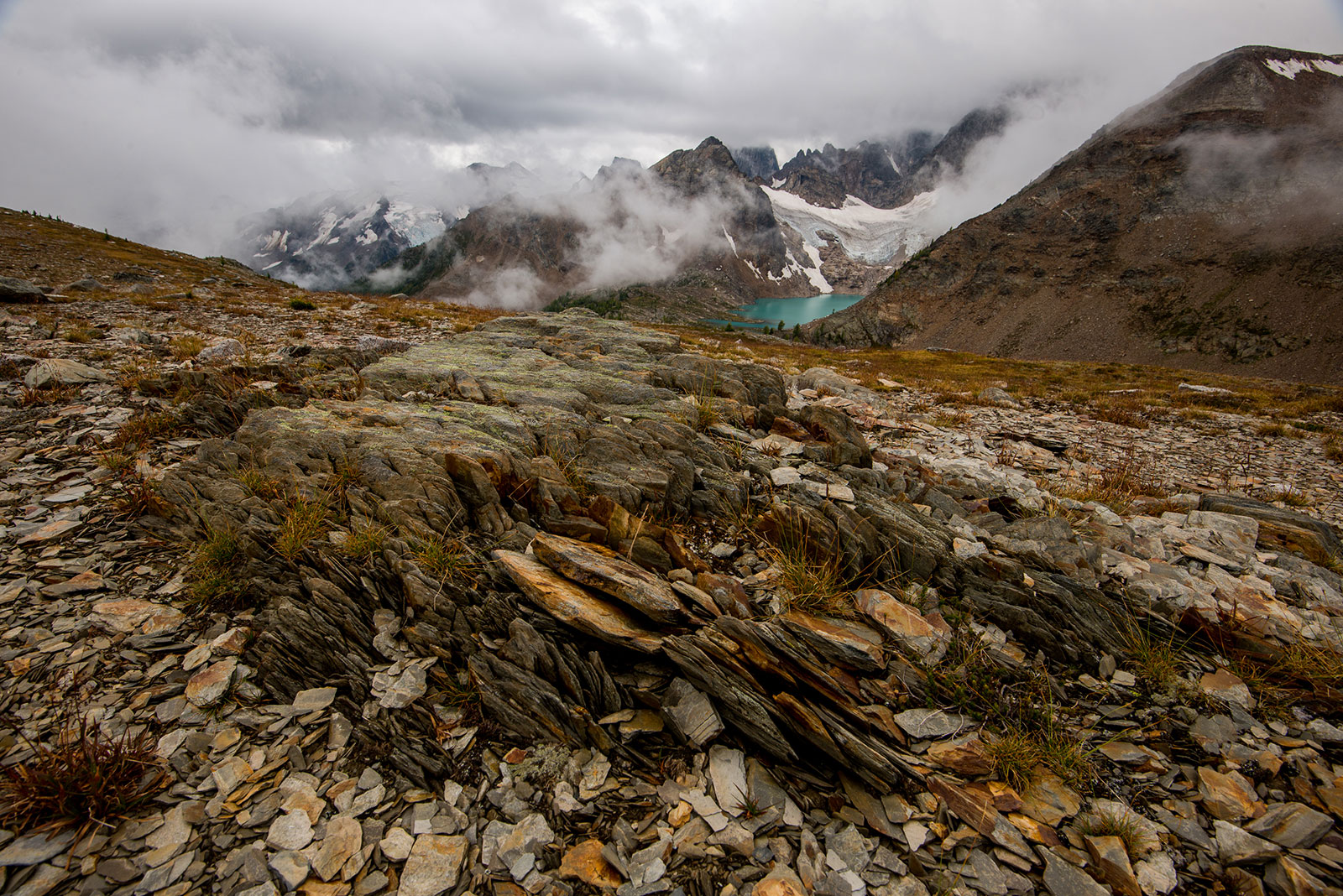 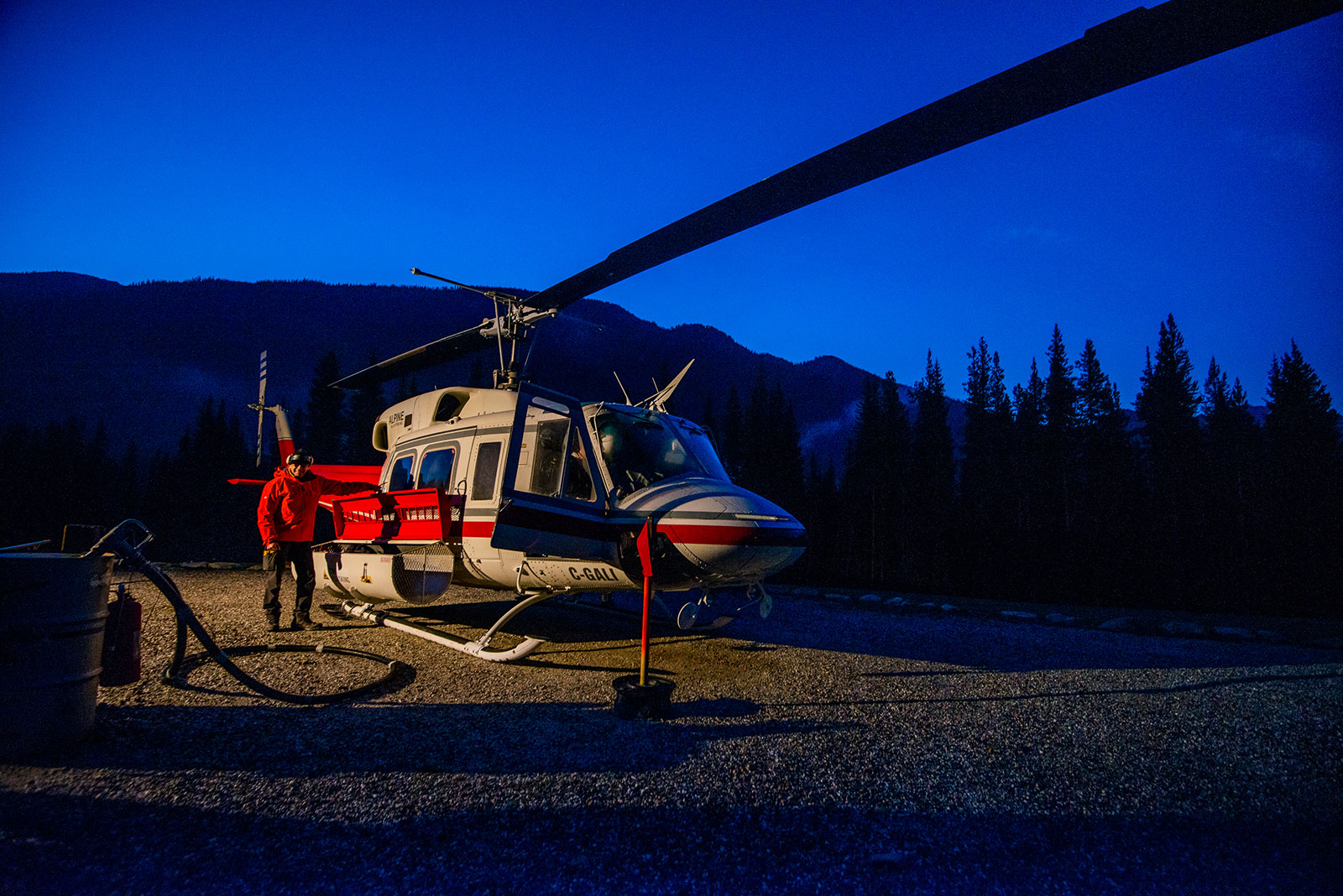 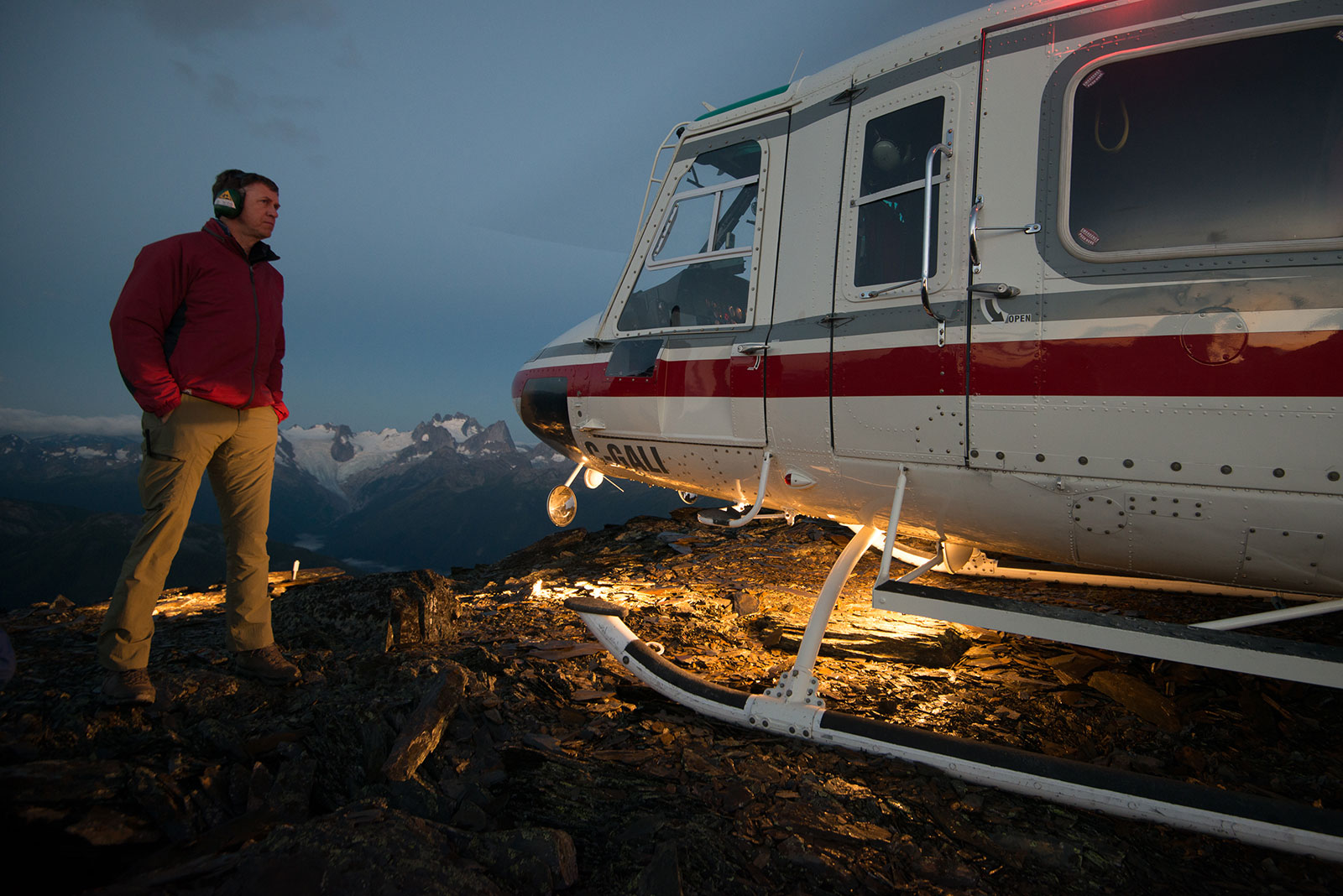 Views from the Top

A glimpse into the world of heli-hiking in B.C.’s Bugaboo Mountains, considered some of the most inaccessible peaks on earth.

“Where do you want me to put it?” says helicopter pilot Jens Gessner, his distant and decidedly uncertain voice crackling over the radio at the Bugaboo Lodge’s gravel helipad. Gessner is asking veteran heli-hiking guide Lyle Grisedale, who’s in the co-pilot’s seat, where exactly to land the chopper on a mountainside in the pre-dawn glow of early fall. Their discussion continues briefly, then the thudding sound of the helicopter gets louder as it returns to the helipad to pick up the second half of a group of photographers headed to the peak to capture the sunrise.

The subsequent wait for the trip to the landing spot that made Gessner so wary of Grisedale’s instructions is a little nerve-wracking. Just where is it on the mountain? Huddling with fellow heli-hiking guests of the Bugaboo Lodge, an impressive log-hewn building with large picture windows and views of the 2,800-metre Hound’s Tooth Spire in southeastern British Columbia’s Bugaboo Mountains, about 80 kilometres south of Golden, does little to ease that feeling.

But minutes later everyone’s scrambling aboard, and the helicopter soon pops above a 3,197-metre peak, where the earlier arrivals are face down some 10 metres from the landing site, shielding themselves from bits of shale sprayed up by the chopper. The group hops out of the aircraft — the mountain’s edge just metres away — and takes in the view of sunshine slowly washing over the surrounding craggy spires.

Getting avid shutterbugs into places where they can see glorious vistas like this is a big attraction of Canadian Mountain Holidays’ heli-hiking photo workshops, as the accompanying images by photographer and September 2013 workshop host Neil Ever Osborne attest. Garnering expert advice and talking shop with someone as accomplished as Osborne is a nice benefit, too. The travel company typically hosts two photo workshops annually at its Bugaboo or Bobbie Burns lodges in the Bugaboos, along with many other themed and regular summer adventure heli-hiking tours.

The heli-hiking and heli-skiing company CMH is the largest in the world. In addition to Bugaboo and Bobbie Burns, it operates another nine lodges in the winter, and takes more than 7,000 guests each year to experience the Bugaboo peaks, which many consider some of the most inaccessible on the continent, if not the world.

And what an experience it is, a far cry from that of the gold prospectors who came up empty handed here around the turn of the 20th century, when they named the Bugaboos after the word for annoyance or anger. Modern adventurers, however, won’t be disappointed as they embark on short flights that whisk them from peak to peak, hike to hike and a succession of stunning views.