Haven in the Sky with Canadian Wildlife Magazine 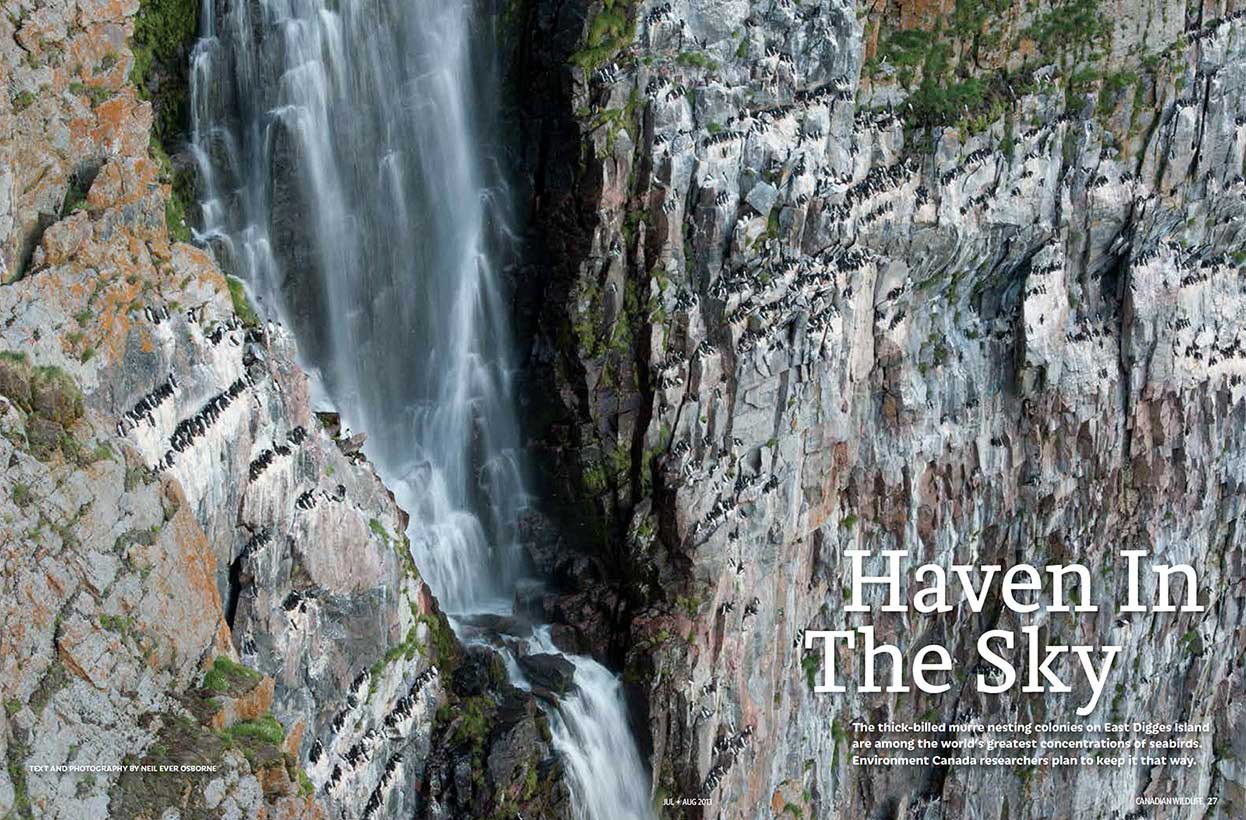 Haven in the Sky

The thick-billed murre nesting colonies on East Digges Island are among the world’s greatest concentrations of seabirds. Environment Canada researchers plan to keep it that way.

By Neil Ever Osborne

Roped into a secure perch on a verdant cliff ledge high above Arctic waters, I stared at a single turquoise egg that had been laid on the bare rock below me. Inches from the edge, the egg balanced atop a crevice, and I wondered how long it would stay put — if the wind picked up, surely it would be blown off and either break on another ledge, or fall into the icy water hundreds of metres further down.

Michael Janssen, a wildlife technician with Environment Canada, was beside me and less concerned. “Cliff-nesting birds have highly conical eggs,” he told me. “This shape makes it less likely to roll away.”

This evolutionary trait might work in principle, but I was not comforted. At least not until an adult thick-billed murre (Uria lomvia) arrived on the narrow mantel with rapid flaps of wings to gain balance and a foothold among the cackling colony. I watched the bird gently manoeuvre the precariously positioned egg with its beak until it rested on webbed feet. Seeing the egg nestled against the warm and protective feathers of a parent, I stopped worrying.

There are not many places in the world with such a dense concentration of nesting seabirds as East Digges Island. On this rocky outcrop protruding from the waters where Hudson Strait meets Hudson Bay, at the northwestern tip of the Ungava Peninsula in Quebec, thick-billed murre breeding pairs are too numerous to count, though estimates hover around 300,000. These birds, along with a colony on the adjacent Quebec mainland, constitute the largest aggregation of thick-billed murres in Canada, and one of the largest concentrations of seabirds in this country.

From my viewpoint on the cliff wall, the pungent smell of more than half a million individual birds was almost unbearable. That, however, has not been a deterrent to Environment Canada scientists who have been studying these murres — whose eggs are part of the traditional Inuit diet in the region — for the past two decades.

“This island and its surroundings have been very important for Inuit harvests, and we work with the local community of Ivujivik to conduct ongoing studies that may detect changes or threats to the environment,” says Dr. Grant Gilchrist, an Environment Canada research scientist.

“Our goal,” Gilchrist says, “is to estimate the distribution and abundance patterns of marine birds and identify their use of key habitat areas within the Hudson Strait region that may soon be influenced by increasing levels of shipping traffic.”

While the annual Inuit harvest remains a central aspect of the research carried out by Gilchrist and the Environment Canada team, it is unlikely that it poses any threat to the sustainability of thick-billed murre populations. The few thousand eggs taken each year probably equal the number that are accidentally dislodged.

The more important challenges for the murres come from issues such as climate change and, more recently, the prospect of increased mining activity in the Eastern Arctic. One project involves the Mary River iron ore deposit at the northern end of Baffin Island, which is described as one of the largest and richest undeveloped deposits in the world. If it is developed, there will be more vessels using the Hudson Strait, possibly impacting the murres and other marine life.

Back on the ledge, I listened to Janssen as he explained how innovative technology is advancing their work. “With the small size of GPS devices now, we are able to obtain detailed information on the movement patterns and habitat use of individual murres.” The response of murres to climatic shifts can indicate that other seabirds could be affected by warming, too.

“We have confirmed that their diet, reproductive success, and longevity are strongly linked to Arctic ice conditions.”

I glanced down the 200 metres of a sheer drop and marvelled at the colour of the sea and the sighting of my first beluga whale, its pale white body an accent among icebergs in a greenish-blue canvas. Then I turned and watched a male and female murre swap places to incubate their egg. This place is a haven in the sky. I hope it will remain that way.

Neil was a fun guy to have in camp. He was always happy to contribute and definitely pulled his own weight. We were also very impressed with the photos and article that he produced.