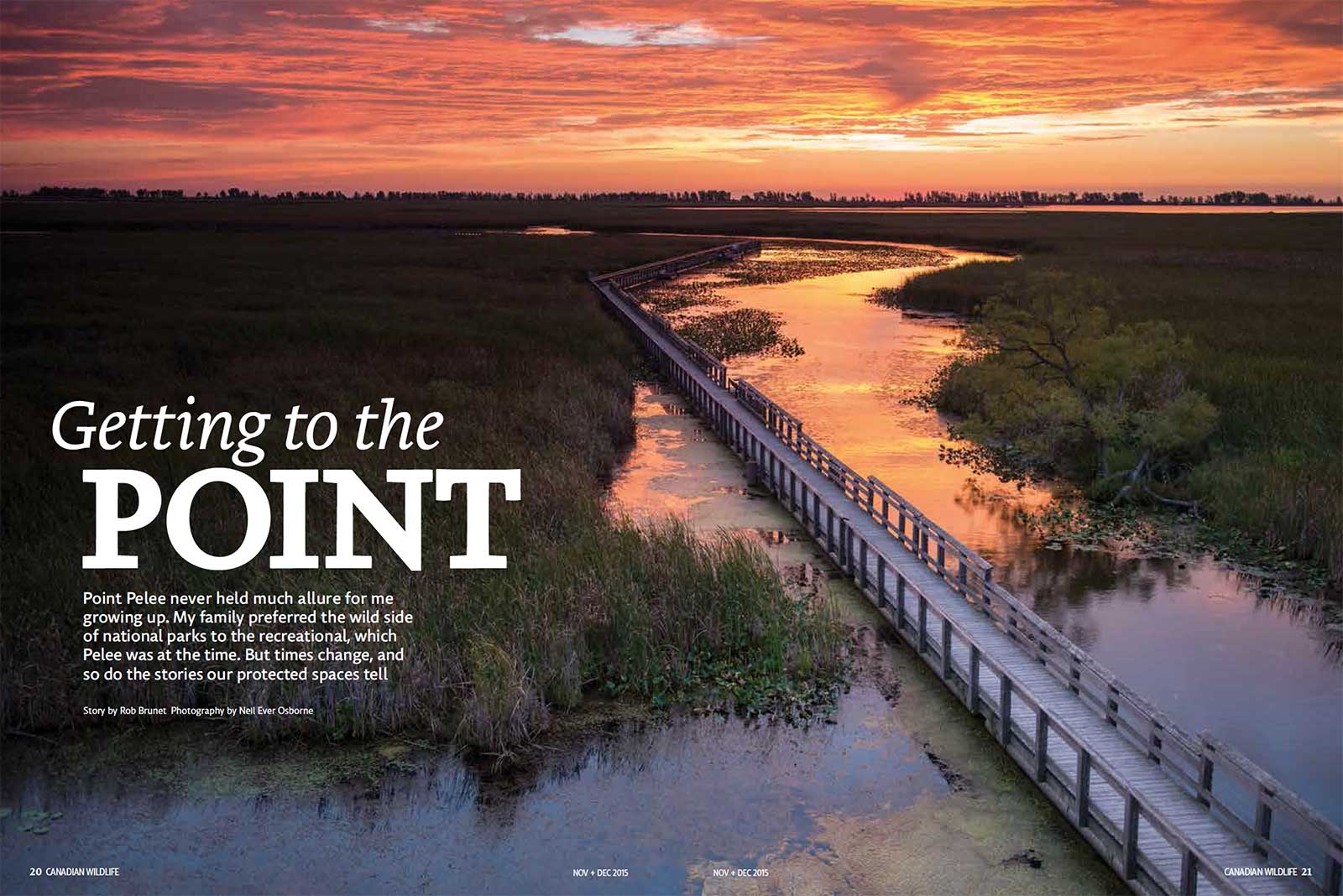 Getting to the Point

Point Pelee never held much allure for me growing up. My family preferred the wild side of national parks to the recreational, which Pelee was at the time. But times change, and so do the stories our protected spaces tell.

Habitat is subjective. Every species has its preference and thrives or dies based on how it relates to its surroundings. Humans are hardly the only ones to tend toward domination, but when it comes to altering a landscape, we can be pretty effective if we put our minds to it. Until I visited southern Ontario’s Point Pelee National Park last summer, that knowledge had always left me with a sour taste. I enjoy architecture and a well-tended garden as much as the next guy, but my favourite environments have always bent toward nature unspoilt.
Still, there’s nothing like a bonfire. On a beach. Shared with good friends. And in southwest Ontario in the 1950s and 1960s, there was no better place for a beach party than the Point. With people loading in from the surrounding communities like Leamington, or making the drive from Windsor and Detroit, you had to show up early if you wanted one of 6,000 parking spaces. No worry though; back then there was roadside parking aplenty for big-fendered cars all down the beak-shaped point to its sandy tip. Carry your cooler stuffed with stubbies to the water’s edge, lay a heavy wool blanket on the sand, thumb the dial on your transistor radio, and you were ready for a date with nature. If you could call it that.

I grew up visiting national parks around Ontario and across the county, but though Point Pelee was never more than a few hours’ drive from where I’ve lived, I didn’t get there until this fall. In its heyday, it probably wouldn’t have made my family’s list. For us, parks meant wilderness preserved — or at least conserved — for light human use, with or without campgrounds, in as natural a state as possible.

Despite having been established for conservation as early as 1918, as national parks went, Point Pelee didn’t fit that profile a half century ago. It was getting trampled underfoot — practically loved to death.

Before this year, the main thing I knew about Point Pelee — other than it’s as far south as Canada’s mainland reaches — came from the news item I’d see each spring about birds stopping there en masse while migrating northward. At a rib shack in Leamington the night before my visit, I asked the owner why we didn’t hear so much about birds in the fall. Surely they had to get back somehow. “Good question,” he said. “Birds are a spring thing. In the fall, people are all about the monarchs. Thick as a black cloud, sometimes.”

In other words, nature was being defined by the humans observing it. A different season, a different take. Too conveniently packaged, I thought. What I didn’t realize was the degree to which continual dramatic change, augmented by human intervention, defines the wilderness that is Point Pelee.

Fifty years ago, Pelee was home to 300 cottages, dozens of massive stone fireplaces, family farms, three hotels, restaurants and other businesses. Of all that, only the DeLaurier homestead remains standing. Pretty much all human-made structures were removed or destroyed when Parks Canada shifted the Point from recreational use and adopted a naturalizing mandate in the early 1970s. Today, to take the trail behind the DeLaurier family dwelling and barn is to immerse yourself in vegetation so dense it feels tropical. The boardwalk cuts through forest to savannah to wetland, and at times the plant life becomes as oppressive as the walls of an English garden hedge maze. Much as I tried, I couldn’t picture the apple orchards and vegetable farming that stood here a half century ago.

But our hand remains in evidence, and there’s more going on here than nature allowed to run wild after the humans were kicked out. Where the trail behind the DeLaurier homestead opens onto a wetland, it’s the remnants of an irrigation canal, dredged by a farmer in the 1800s; the abandoned agricultural waterway is ideal new habitat for wetland species, some of which wouldn’t fare as well in the cattail marsh at the north end of the park. And where the invasive European common reed chokes out diversity, park staff push back — restoring nature and giving endangered species a better shot at survival.

We’re part of the balancing act. Nature has a way of periodically clearing huge swaths of land for regeneration — with forest fires and ice scours, pestilence and extreme climatic events. Without human intervention, any one of these could take a serious bite out of biodiversity in the Point.

If it weren’t for the intensive agricultural activity surrounding the park, perhaps the ebb and flow of nature could be allowed to take its course. Preservation could involve less of an assist. As it stands, however, crop lands press tight against Pelee’s northern boundary, and almost 95 per cent of native forest cover has been stripped from Essex County. It’s hard to imagine a more compelling reason for active habitat management within a 15-square-kilometre park, a narrowing slice of land jutting into Lake Erie, whose climate zone has no Canadian equal. And so staff use controlled burns, cormorant and deer culls, native species planting, and other tools to create and maintain a greater variety of habitats than might otherwise persist in such tight confines.

In the cattail marsh, the reeds them-selves convey never-ending change, filling my entire field of vision with a dynamic tableau. Waving in a light breeze, they bend and ripple, a tapestry of ochre and olive, giving way to smoky greys and chocolate brown. Sand and wind and water and fire in constant dance. Nothing static. Nature doesn’t work that way.

It looks like a monoculture until I stop to look closer. Between the stalks, a state of quiet turmoil where smaller plants grab footholds and then erupt along the boardwalk, opportunistically glomming onto a space created by humans not unlike meadow species that thrive alongside rural highways.

The same plays out on the edges of channels cut through the cattails to allow visitors and Parks Canada ecologists to navigate to the ponds that cover the north-eastern section of the park. In one clearing, a turtle has found a log that could never have reached that spot were it not for the cleared channel; it would have been caught up in the reeds closer to shore. Sunning itself a half kilometre from dry land, on a piece of wood that didn’t belong, the turtle doesn’t appear to mind the human interference that resulted in its perch.

By the time I make my way to the tip of the park, the serenity that is Point Pelee has taken hold. A kettle of turkey vultures ride hot air thermals, seeking altitude to continue their migration. Eight birds circle five or 10 metres above the trees, while a couple flap below them. Three more soar 50 metres higher and, far above those, another is barely a smudge in the sky.

Competing currents down the east and west coasts of Point Pelee continually shape and build and erase the sand spit tickling the 42nd parallel. It seems only natural that a sliver of land continually evolving under pressure by human and natural causes should culminate in so impermanent a space. The tip can change in shape and size in the space of a few hours.

Today, under brilliant sun with a light breeze, the eastern side is a frenzy of whitecaps on slate grey water. The same lake, hardly 10 metres to the west is deceptively calm, flat and the colour of manganese. Where the two currents push together, whitecaps criss-cross, bringing sand off the lake bottom, lifting and dropping it in the constant churn.

Point Pelee has shifted my point of reference for national parks. Nature’s constant state of flux can no more create an unchanging ecosystem than human intervention can result in structures that are permanent on an ecological scale. We’re a part of nature, not separate from it. And while humans may be about as invasive a species as imaginable, there’s much we can do to remedy our own historical impact. Even more, we can — and in Point Pelee, we do — contribute to other species’ ability to thrive.

I took a few pictures when I visited Point Pelee, and they’ll help me remember my visit. But it’s Neil Ever Osborne’s photography of the same place which takes me back there, evoking the peace, colour, sound, and movement of a remarkable landscape and the life within it.